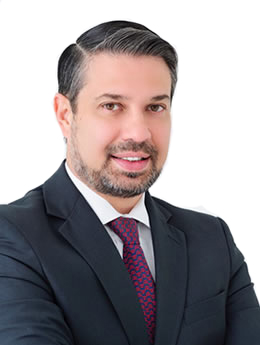 He provides legal advice in several sectors, with emphasis on cement, mining, industrial projects development, government actions and infrastructure. Parigot began his career at one of the largest global US law firms in the early 1990s. Subsequently, Parigot served as a Risk Management (EHS) consultant for energy, mining, steel, infrastructure, and oil & gas projects in one of the most respected US global risk management consulting firm.

Having more than 25 year-experience as business lawyer Alexandre carried out significant projects, for example, working as a third-party consultant for the one of the largest E&P oil company in LatAm, performing more than 1,000 site assessment, resulting in more than 22,000 thousand hours of work in the US, MEX, ARG, BOL, COL and BR.

Among the most relevant cases where Alexandre worked are some of the worst environmental disasters in the country, such as the disruption of the Cataguases and Mariana mining sludge dam, the leak of endolsulfan (category I pesticide) in the Paraíba do Sul river and the oil leak in Guanabara Bay. In addition, Alexandre has been very active in the acquisition diligence as well licensing and re-licensing of a wide range of industries in Brazil and in the recent years which includes 5 cement sites; 11 power plants; 2 construction-aggregate plants; 14 concrete mills; 2 sanitary landfills; 2 industrial land farm; 3 non-metallic mines; more than 100 sugarcane farms and several smaller activities.

He is currently a former Board Member of FIESP and FIRJAN for environmental and water resources issues, both of which are the main Brazilian industrial association. Alexandre is a former Sustainability Director of the Association Executives of Finance of Brazil and a member of the Association of Environmental Law Professors of Brazil. He was recently named one of the most admired lawyers in Brazil by Análise Advocacia 500, the most important legal ranking published in the country and voted the best lawyer Brazil by Financial Environmental Magazine.